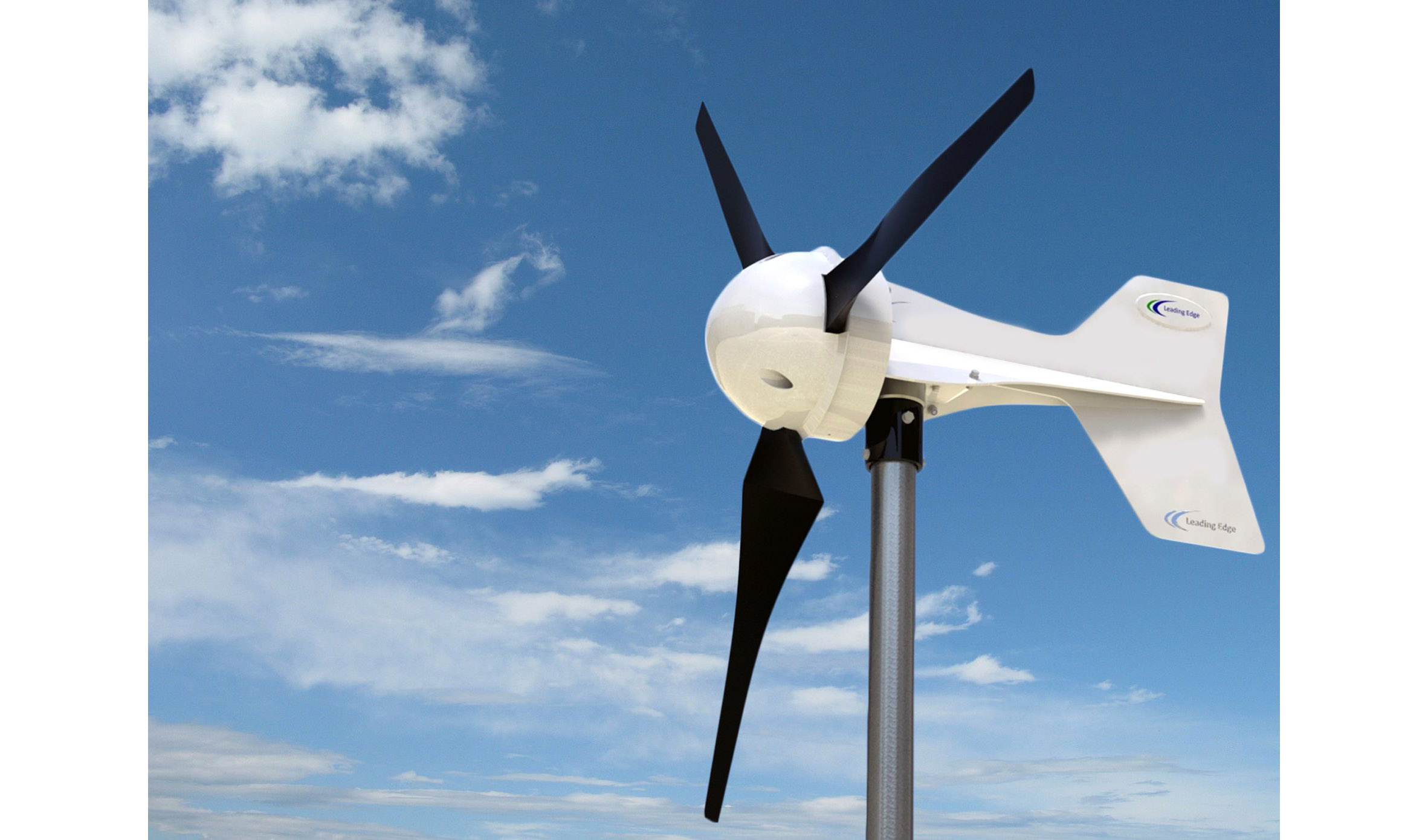 Small scale domestic wind turbines are available, many of which are suitable for installing on the roof of a dwelling. Generally the propellers drive a small turbine, which is used to charge a battery, or is connected to the grid. A single installation will not provide enough power for you to go totally off-grid, but can still reduce your electricity bills, and reduce your CO2 footprint. It is estimated that the average household consumption is approximately 4500 KWh and a domestic wind turbine with a span of two meters might yield 500 KWh per year, or a 5th of annual consumption. However the cost effectiveness of an installation will depend very much on location. A wind turbine will work better in rural areas than urban areas; check the Department of Trade and industries wind speed database NOABL, and British Wind Energy Association website for more information regarding wind speeds in your area.

Broadly there are two categories of wind turbine. The Horizontal axis wind turbines, and the vertical axis wind turbines, of which the former has gained the ascendancy, largely as a result of its higher efficiency. Modern utility wind turbines are invariably of this type, and here in the U.K. are set to become ever increasing features of our landscape. The recent trend towards off-shore wind farms is the result of planning difficulties and the benefits of increased wind speeds out to sea, although construction costs are considerably higher.

As the name implies, the turbine rotates horizontally, so that the blades face into the wind, the rotation is achieved with a wind vane, or with larger turbines, a sensor coupled with a servo motor. HAWTs can also face away from the wind, and can thereby dispense with a device for pointing them into the wind, but some turbulence is created by the mast, that adversely affects the performance of the turbine, and increases the chance of structural failure due to metal fatigue. With all HAWTs, the generator is at the top of the tower, and is generally fitted with a gear box, to increase the speed of rotation, to a level suitable for power generation. Most turbines are equipped with shut-down features, to avoid damage at high wind speeds, or have other safety features built in to avoid over stressing. The disadvantages are transportation of the long shaft and blades, specialist construction, and cyclic stresses that can lead to failure.

Vertical axis wind turbines are less frequently seen. As the name suggest the axis is placed vertically, with the vertical or helical blades rotating around it. The advantage of this type is the bearings can generally be placed closer to the ground, where they are more easily maintained, and there is no need to point the turbine into the wind, the turbine can continue to function even in areas where wind direction is highly variable. However there are disadvantages in the blades being closer to the ground, the wind speeds are slower and the turbine will be subject to more wind turbulence caused by nearby obstructions, which can increase the wear on mechanical components. Types include the Darrieus wind turbine and the Savonius wind turbine.

The only VAWT to be commercially produced in any quantity. The design has two or three symmetrical vertical aerofoils. While theoretically a very efficient design, it suffers from low start up torque, often requiring an external source of power to start it rotating, and high cyclical stresses, making the design impractical for large installations, in addition the blades are typically too close to the ground to operate efficiently. A variant of the Darrius design, the 'eggbeater', has the aerofoils curved along the axis of the drive shaft, to reduce centrifugal forces, which in turn, reduces the cost of construction.

A simple type of VAWT, consisting of a number of wind scoops around a vertical axis, similar to a nanometre. Owing to the shape of the scoops, wind resistance is lower on one side than the other, causing the turbine to rotate. It is always self starting, providing there are three of more scoops, but the design is not very efficient. However, it is favoured in locations where reliability and low maintenance are more important than efficiency. The scoops sometimes have a helical shape to smooth out the torque.